Public Servants to the Rescue

Pathway to Recovery® Series
Public Servants to the Rescue

We need to encourage more young people to enter public service because, when the chips are really down, it is always public servants who come to the rescue.

From the NYFD’s first responders on 9/11, to those brave men and women battling wildfires in the western states right now, to the FEMA hurricane relief efforts in the south, it is always public servants who have risen to the occasion when duty called. But all too often, public servants have taken a bad rap. In an oversimplification of a complex set of problems facing our communities, public servants often unfairly take the blame for high property taxes. But when you really need help, who do you call first? Public servants, without fail, in every single case.

If you ever have to make a desperate 9-1-1 call because of an emergency, a public employee will be on duty ready to dispatch the assistance you need. And, when you hear that siren signaling that help is on the way, you’re likely to bless the firefighters, police, or EMS responders that arrive in your hour of most desperate need. They are public servants, and they are funded by taxpayer dollars. 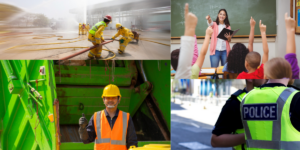 Of course, we rely on public employees for more than just emergency services. They also educate our children, plow our roads, serve in the armed forces, deliver much-needed (now more than ever) public health and human services, staff back-offices providing clerical services, and keep detailed financial records of how every tax dollar gets spent.

State and local governments have never fully recovered from the effects of the recession of 2008-2009, and they now face the additional challenges caused by COVID-19. Public sector payrolls have been steadily reduced over the past ten years, and vacancies can be hard to fill. New positions are almost impossible to get approved, despite a growing population and an ever-increasing demand for public services.

The steady but lackluster economic expansion of 2010 through 2019 brought no real relief to municipal budgets, and thus did not translate into job creation (or, more appropriately, job restoration) in the public sector. This has resulted in all those in public service being asked to “do more with less” in order to maintain and deliver critical public services.

If you have already dedicated yourself to a career in public service, we thank you. As Jacob Lew, former Secretary of the U.S. Treasury said: “There is no higher calling in terms of a career than public service, which is a chance to make a difference in people’s lives and improve the world.” If we hope to attract the best and brightest of the next generation to public service, then we must help to transform the nation’s dialogue about people serving in government.

All of us should be encouraging the next generation to serve their community and to do their part to make the world a better place. It is also important that we lead by example when it comes to things like integrity, honor, and the value of being transparent and honest with those we serve.  We have an obligation to show that public service is an honorable and noble profession, and we should mentor new hires in the “best practices” that we have developed and learned over the years. The taxpayers of the future deserve nothing less.

The overwhelming majority of public servants are dedicated, hard-working, trustworthy individuals who decided somewhere along the way to commit their lives to making the world a better place, while still managing to earn enough money to pay their bills, raise a family, and contribute to their community. And when the chips are really, REALLY down—as they are right now—it turns out that public servants are the people you count on the most to save the day.